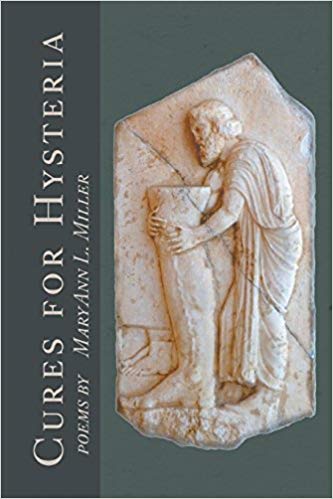 In her poem, “Capsule,” MaryAnn L. Miller writes about a lifelong illness,

often misdiagnosed in females as

Cures for Hysteria examines the speaker’s baffling and misdiagnosed disease, a “mysterious illness soughed off for fifteen years/as a ‘woman’s complaint’.” Miller’s poetic eyes and ears recount the childhood onset of HyperKalemic Periodic Paralysis with Myotonia in an Italian-American Catholic household. The poems have the weight of the inert body and the heft of female guilt. But, as an alchemist, Miller transforms this leaden world into gold.

As I read Cures for Hysteria, I thought of a passage in Helen Barolini’s anthology of Italian-American women writers, The Dream Book. In it, she states

They were, instead, susceptible to the idea that excelling or drawing attention to oneself was not womanly, not good. This notion was prevalent in a society in which belief in malocchio—the evil eye—was present on all levels.

The speaker’s illness was viewed by her family and her church with suspicion, shame, and fear. The mother asks her daughter, “Do you want to end up in a sanitorium?” While the father grabs her and asks, “What’s the matter with you?” Miller draws upon historical “hysterics” as well, thus giving the treatment of ill women an historical—almost gilded—relevance. In “Villa Clara, Cagliari Hospital, Sardinia, Italy Giovanna M. 1823-1913,” Miller writes

What scrapes the inside of her ten-year-old skull?

She says it’s a “cranky head.”

Catholicism—entwined almost genetically in an Italian culture, with all its sexual inhibitions—

becomes another weight paralyzing the speaker. The belief in transubstantiation—the changing of bread and wine into the body and blood of Christ—reflects the horrifying nature of the physical self: Don’t chew the host, a girl did that once and choked on blood. The female body attracts—of is the cause of—the speaker’s illness:

stay out of trouble

don’t be an inconvenience

Miller illustrates this man-made revulsion with her images of created, non-human women. Like a robot, the body becomes inhuman: “effect hysterical paroxysm by stimulation of her genitals/invent a machine to do it as your hand will tire . . . .” In “La Belle Indifference,” the speaker’s immobility is both physical and emotional,

Because a wear the tin-can corset with two holes punched

in the bottom for my legs,

It’s in those who won’t believe a female,

not even one they love.

The body, too, is made insubstantial, paper-thin as a communion wafer. The speaker’s paper doll Veronica (from the Archie comics, but also the saint who wiped Christ’s face as he carried the cross) is hidden from the nuns, and her “proportions are off./Her bosom is huge.”  As the disease manifests again in adolescence, the speaker thinks “about making myself very flat.” Like guilt and paralysis, lack of agency is giving a physicality in this book.

I’m welded to the bed

try to roll, bring a knee up

imagine someone big and fat on top of you

I found Miller’s ability to examine female-ness in the light of illness and shame. The moments when the illness demanded a denial of her femaleness were heart-breaking. From the father telling her to “Be a good little soldier,” to the speaker as an adult, a mother, responding to her son’s disease by ensuring she’ll never have another child

four men on a hospital panel.

Miller’s descriptions of the physical sounds of a differently functioning body are weighted and poetic:

lying in bed I locate bone

thorns in my amygdala

kopfhalter belts me in the bed

In this way, the poet takes the paralyzing experience and transforms it into art and service. Miller endows the subject with historical illumination, “because of centuries of medical bias against females.” In the poem, “How Mary Barnes Worked the System,” the subject (artist Mary Barnes who honed her craft by being committed to an asylum) learned

her breasts were shit      her womanhood shit

Imagine a man drawing penises with his own feces

Cures for Hysteria is a rich, muscular testament to the female spirit. MaryAnn L. Miller breaks the bonds of narrative, while remaining true to a healing arc. In “Ghazala,” Miller states, “There are books unbroken on the shelf/written by mistaken women.” Miller’s collection stands out as one of those books. I loved that she recalled one of the greatest Italian-American poets, the late Lucia Perillo, in her poem, “Involuntary Recumbancy,” when she says, “They teach us to rise.” The weight of misdiagnosis, of superstition and misogyny, of illness all rise in the presence of this master poet, and “stillness settles where the wing meets the joint./Skin is soft whistle weighing nothing.”