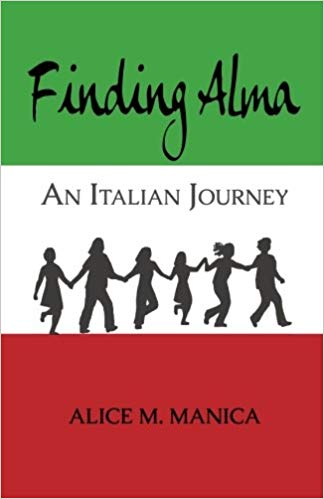 It’s a story of the classic double world that most Italian-Americans live in: we’re not quite American, yet we’re also not quite Italian. Alice M. Mancia deftly navigates this double world in her debut work, Finding Alma: An Italian Journey. In this work, Ms. Mancia, through her main character, Alma, takes her readers on a pivotal backpacking journey through Europe where, during a stop in Italy, Alma meets her long-lost Italian relatives.
This meeting ended up changing the course of Alma’s life—prompting her to leave her comfortable job as a nurse to return to Italy to live for an extended period of time, learning the language and customs of her family. What was most striking about this book was the bonds that Alma formed with her Italian relatives—in fact, the second half of the book shows just how everyone’s lives changed after meeting each other and how, despite years of separation, the closeness returned every time they were once again in each other’s presence.

Readers will particularly enjoy learning about life in Italy during the 1970s and 1980s through this book, especially customs surrounding marriage and family, as well as various laws and legal matters that are discussed. The role of a woman in Italian society during that era is also touched upon in this work—while Italian women also underwent their own wave of feminism in the 1960s and 1970s, the patriarchal society did not quite accept women’s changing roles. This story is most well-represented during the chapter on the life of Alma’s cousin, Gianna, who discovered her husband’s infidelity and had to come to terms with the decision to stay or leave him in light of the revelation. Also intriguing is the story of Alma’s cousin, Veronica, whose husband, Danilo, clearly tried to impose his will on their marriage. How Veronica dealt with the shift will at once leave readers flabbergasted at Danilo’s iron fist and happy for Veronica when readers discover the outcome of her story.